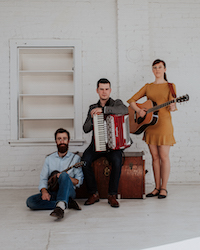 Steeped in the visual styles of western Canada, three-piece Victoria-based folk outfit West My Friend mingle grassroots guitar, mandolin, accordion, and interweaving harmonies. After ten years as a band and 700 performances under their belts, they continue to refine the art of creating achingly poignant folk music. Their songs are intricate yet accessible, melancholic yet optimistic.

Thank you to Victoria Olchowecki for sponsoring these performances.