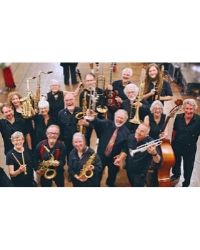 Swing Shift will begin the concert performing swing, Latin, pop, seasonal, and funk music of Count Basie, Tito Puente, Eddie Harris, Frank Loesser and the Beatles. Bandemonium will begin the second half, playing familiar favourites of Handel, Elgar and Tchaikovsky, along with a few tunes to get you in the mood for the holiday season. The grand finale will see both groups united, as they play big band melodies of Stan Kenton, Glenn Miller and Billy Strayhorn, as well as a jazz-flavoured medley of holiday favourites.

The bands are led by Wendy and Derrick Milton who created them in 1993. For the past 20 years Bandemonium was known as the Salt Spring Concert Band. Wendy retakes the baton as music director after a 20-year hiatus, and our board of directors decided that it was an appropriate time to change the name back to Bandemonium, a name reflecting the diverse makeup of the group. The members of both bands come from all walks of life, and are of all ages, with a wide variety of musical experience, from relative novice to seasoned professional. All are united by a love of community music-making.