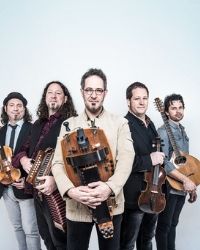 × Not only considered an incomparable French ambassador, Le Vent du Nord is a driving force behind Quebec's progressive folk movement, as well as a key group in the renaissance of Quebec's traditional music. “Featuring button accordion, guitar and fiddle, the band’s sound is defined by the hurdy-gurdy, which adds an earthy, rough-hewn flavor to even the most buoyant dance tunes.” — Boston Herald