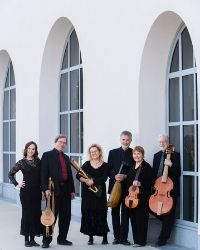 × The Food of Love: Songs, Dances, and Fancies for Shakespeare.

Ethereal soprano Danielle Svonavec performs some of the greatest hits from the Bard's songbook and the Baltimore Consort instrumentalists play sparkling arrangements of dances and consort music related to the plays, with their exquisite assortment of instruments.

“Few early music players have more fun making music than the Baltimore six, who through their performances, take the position that echoes of renaissance secular music are still to be found in modern folk practice.“ – The New Yorker