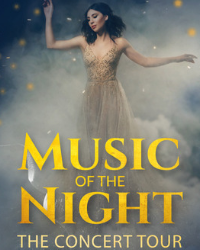 Music of the Night: The Concert Tour

× A concert celebration of Andrew Lloyd Webber's 70th Birthday and his acclaim as the most successful musical theatre composer of all time. Featuring Webber's most iconic theatrical music including selections from Phantom of the Opera, Evita, Cats, Jesus Christ Superstar, Sunset Blvd, and more! With an internationally-acclaimed professional cast, this parade of musical offerings is sure to overwhelm the senses. Sound the Alarm’s Music of the Night Concert Tour will remind seventeen BC audiences, from Courtney to Cranbrook, why Andrew Lloyd Webber is the musical phenomenon he is known to be.