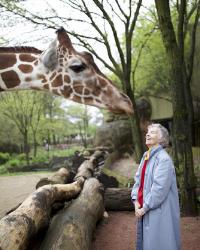 See the inspiring film that had sold-out Vancouver audiences on their feet applauding! The Woman Who Loves Giraffes is Dr. Anne Innis Dagg, “one of Canada’s greatest scientists, man or woman”, who was the first scientist in the world to study African animal behaviour in the wild, four years before Dr. Jane Goodall.

Dagg’s seminal work did not lead to university tenure; her academic career was thwarted by the male establishment. But she persevered as a writer and feminist activist to become an icon for the next generation. As she retraces her 1956 journey, beautiful footage compares giraffe life then and now.