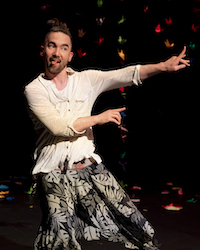 Sansei: The Storyteller examines one of Canada’s darkest moments. On December 7, 1941, an attack on Pearl Harbor triggered the internment and dispossession of tens of thousands of Japanese Canadians living along Canada's west coast. Through an engaging blend of dance, spoken word, historical audio, family interviews, and unexpected humour, Kunji Ikeda weaves an illuminating tale that is profoundly personal. Sansei: The Storyteller offers Ikeda's observations about the Internment, his discovery of where he came from, and how his family navigated their histories. Nominated for two 2019 Betty Mitchell (Calgary Theatre) Awards.

Thank you to Mouat’s Clothing Co. for sponsoring this performance.

Kunji Ikeda creates original performances that combine narrative and dance. Through training in dance and theatre he has developed a unique methodology combining story, imagination, and choreography that has lead to being named the 2015 Emerging Artist by Calgary Arts Development Authority. He has trained extensively with Denise Clarke of One Yellow Rabbit, recently serving as assistant director for Radioheaded 3.

Ikeda is a member of the DSW Dance Action Group, has taught at the University of Calgary and the Rosebud School of the Arts, and served as Artistic Director of MoMo Dance Theatre.

His work has been produced in the Alberta Dance Festival, Fluid Festival, FEATS Festival of Dance, and Expanse Movement Arts Festival among others.